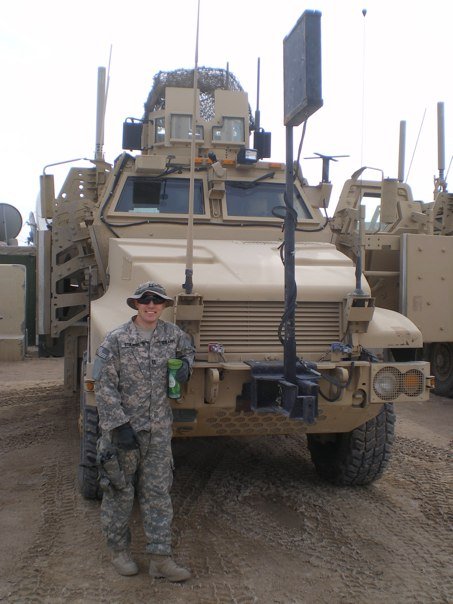 Today I’d like to move along the plot a bit and share a comical story. At the time, this was more of a disaster story, time has changed it into a fairly funny tale. Time’s a crazy thing like that. A couple different twists and this soon to be told story could have taken a drastically different road. When I look back on this particular day a flood of conflicting emotions still rush through me. Let’s explore that.

December 2009 – I’m in Basrah, assigned to a Border Transition Team. This was similar to the Military Transition Teams fielded after the Surge but we were partnered with the Iraqi Border Police instead of the Iraqi Army. BTTs were generally 12 man teams composed of various specialists from across the Army, cobbled together and put through a 3 month school designed to turn us into military advisors. For us, we got a special week of training in El Paso with the US Border Patrol and US Customs Enforcement so that we had some kind of idea about border enforcement. With that I, a fresh captain with 3 years in the Army, was supposed to mentor an Iraqi colonel who had served 28 years in 3 different branches of the Iraqi military (yep, he fought two wars against us). My counterpart was in charge of doctrine for the 4th Region Border Police Academy. Yep, I had no business telling this guy anything, and we both knew it. With that in mind we had a pretty friendly working relationship, exchanged some gifts, and made the best of the situation. He struck me as a person who wanted to do something good for his country and just live in safety. I hope he is still well.

Now that there is some context, let’s get to the LoLz.

So my team lived remotely, not on the large US base COB Basrah. We were at an outpost called Camp Savage. It was a tiny cluster of storage containers used for living and working surrounded by HESCO barriers (think of large sandbags about 4′ tall and 3′ around). Camp Savage was located within a large Iraqi Army base that used to be an Iraqi Air Force base. This base also contained the BP Academy. Camp Savage was a few dozen miles from COB Basrah with only 3 different routes for us to take, each with only minor variation. No matter what the drive would take 45 – 60 minutes. We were equipped with one of the newest MRAPs, Caimans (pictured above). Talk about a gas guzzler!

Once a week or so we would make a run to the COB for all the typically mundane stuff – get resupplied, pick up mail (one of my extra duties!), stop into the COB HQ to touch bases with counterparts, visit the other BTTs based out of the COB, and whatever other team business we might have. We liked to get out of there with enough daylight to get back to Savage. The routes always took us by some vulnerable areas, trash dumps (easy to hide IEDs), tight curves (Caimans rolled over at a 30 degree yaw), overpasses, and we would always lose radio contact with the COB once we got within a few miles of Savage.  Our SOP stated that if we ever reached a destination with half a tank of gas or less that the crew was supposed to get it topped off before departing again. Pretty simple stuff, certainly not a challenge for a team made up of senior NCOs and officers. (Did I give away the surprise yet?).

This day our team was down to 11 as our team leader was home on his 2 weeks of leave. With three vehicles that each require 3 people (driver, TC, gunner) that only leaves 2 extra bodies, so one vehicle has no spare dudes. We leave the COB later than we should have, a couple miles out from the gate we exited the highway to take a sharpe turn onto an overpass which would have left us with a straight shot back to Camp Savage. This route was nice for it’s clear sight lines and simplicity. The turn and overpass at the beginning were the only real choke points. This turn had one of those large trash dumps right beside the road. I always got nervous going by this place because there was a large pipe sticking out from a pile, about 20′ long and 4″ or 5″ in diameter. It was the perfect place to plant an EFP which was one of the few things we had to worry about with our Caimans. Bonus, this fucking pipe was at such an angle that it seemed to stare right at me each time we passed it. With the turn being so sharpe we really couldn’t speed by the spot or even alter speed much. Driving through this spot made my mouth go dry every single time. After getting past that pipe I may or may not have, on occasion, reached down to grab my balls out of thanks that they were still there.

OK, so we got by that bit of the road, just get over the bridge and we’re on easy street. Expect for some reason, on this day, we ground to a halt with all three vehicles on the bridge. For anyone not following at home, this is one of the most vulnerable positions we could have been in with these vehicles. We’re sticking out like a sore thumb. There’s an Iraqi Army checkpoint right beneath us, and some other small utility buildings to the rear and off our right. Either one of these could have had an insurgent spotter in them calling in his buddies to let them know they had easy pickings. I’m the TC (commander) of the trail vehicle, all I can see ahead is the second Caiman, I’ve got no eyes on our lead vehicle. My driver, my gunner, and I are all thinking “Why the fuck are we stopped? What the fuck is going on?” I squeeze the radio mic and ask the other two TCs what’s going on. Silence. The radio traffic comes through speakers in the vehicle, so everyone can hear what’s being said (or not said).

You may have heard someone describe their blood running cold, feeling their butthole pucker, or feeling their balls in their throat. Yeah, all of that at once. We were about to have a very bad day. The TC from vehicle 1 called back to me asking what I was seeing. We realized the TC in vehicle 2 must have a dead radio or headset, and I was the only one who could relay what was going on. All of a sudden we (vehicle 3) see the driver and TC doors of vehicle 2 opening and out pop the driver and TC. This happened to be the one vehicle without a spare crew member, so the TC had removed his radio headset and not told us what they were about to do. They both head to the rear of their Caiman. Seeing this my gunner said “Oh no, they’re not doing what I think they’re doing, are they? Are they seriously going for the gas cans?” Better believe it. Atop the bridge, balls flapping in the wind, the driver is pulling off the spare gas cans and dumping the fuel into his truck while the TC watches his back. The biggest mouth on the team forgot to fill up before leaving the COB and now we were all sitting around waiting for an IED to go off or a barrage of RPGs to fly our way. Completely stunned I got on the radio to let vehicle 1 know what was happening. Amazingly this joker finished up, secured the empty gas cans, mounted back up, and we took off. Back at Camp Savage we all topped off our trucks and then the team had some, uhhh, lively discussion and decided to never speak of this once our team leader got back.

I can laugh about this story now. At the time it caused a lot of anger and tension on the team. For years afterwards I would think of this day and start ‘what if-ing’ every possible bad scenario that could have happened. The anger would flood back. I had a hard time getting over some of these stupid things, obsessing over what could have happened and why they didn’t. Eventually I grasped just how toxic this behavior was, I found some peace with my hangups. What is important is that the bad shit that could have happened didn’t, the ‘why’ doesn’t matter. What matters is that, for me, things turned out for the better. I am here, I am thankful, and I focus on the present moment not the past which cannot be changed.

This was easily one of the top 3 most fucked up days of my life. Nobody died though, everyone made it back home, so really, how bad is that? I learned a lot from this day, but it took years for the lessons to sink in. These 1500 words can best be summed up by Marcus Aurelius “Every event is the right one. Look closely and you will see.”