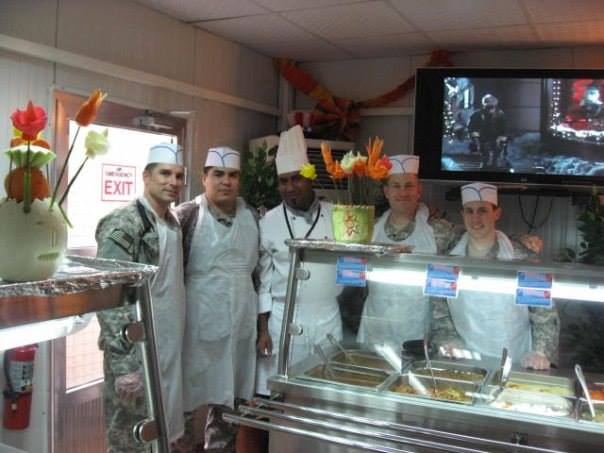 Last year I wrote about my Thanksgiving in Korea, this year I thought I’d talk about my other Thanksgiving experiences. Each was very different and ran a spectrum from worst Thanksgiving the some of the best. They covered the globe from one end to the other, and took me to one of the oddest places in the United States (El Paso). I hope you enjoy these memories.

My first Army Thanksgiving was in 2006. I was at Fort Bliss for my Officer Basic Course and very much unaware of what the holiday was like on active duty. In 2006, Fort Bliss was still just the home of the ADA school house. Soldiers going through their AIT (specialized schooling after Basic Training) and officers going through their OBC and the Captain’s Career Course. It’s changed a good deal since then, but at that time it was a fairly small post in terms of personnel.

Pretty much everyone on post was given a half day on Wednesday so that you effectively had a 4 1/2 day weekend. I had no clue about this and had decided to stay local instead of trying to get back to Buffalo from El Paso during the short break. Most of my OBC classmates however did leave. So there I was, El Paso, Texas, all by myself like a Green Day hidden track. Living in the annex of the post hotel I didn’t  have a kitchen. The hotel annex was an old barracks that had been converted to kind of look like a hotel suite. Two former individual barracks rooms were connected to a single bathroom. The way this layout was it provided a typical hotel bedroom, a squeezed in bathroom, and then another room that passed for a living room. Pretty sparse, really ugly, a heating unit that was centrally controlled, but at least the recliner was good for napping.

By dinner time on Thanksgiving I was stir crazy and went out in search of a passable meal. Unknown to me, all the dinning facilities closed after lunch. All of the enlisted soldiers who had stayed on post had been adopted for the day by local families. Nobody had thought to tell the OBC students about this. So stupid lieutenant me was left wondering how the fuck to get a Thanksgiving meal. Off post I went, starving and already sick of being by myself I stopped at the first place to sit down for a meal. That happened to be the Village Inn on Airway Boulevard. Slumped in a booth by myself, watching families enjoying their dinners I didn’t even feel like eating a normal Thanksgiving meal. I ended up ordering chicken parm, and it was easily the worst chicken parm I’ve ever tasted. That meal was even more depressing than it sounds. I ate out of necessity and headed back to my lonely room in the too hot and too dry hotel annex. There’s not much more of that Thanksgiving that I can remember. I think I’ve pushed a lot of that memory out of my brain. No doubt it was the worst Thanksgiving I can remember, but I know it could’ve been a lot worse than simply having to eat a crummy meal alone. At least I still had beer in my fridge.

The following year I was in Korea. If you’ve not read about that Thanksgiving check the hyperlink above. We’re skipping past that for now and heading to Fort Hood in 2008. My second opportunity to serve Thanksgiving meals to troops. Unlike in Korea where we wore ACUs while serving, this time it was dress blues – as it should be. While I noticed some of the other LTs shirking out of this detail, I was absolutely giddy. I mean, that damn dress blue uniform set me back $700 so it was nice to get some use out of it. The day itself was so much more though. Thanksgiving offered a rare opportunity to serve your soldiers, to show genuine love of those whom you led. It’s a really simple gesture. In practical terms I just stood around for a couple hours lumping  mashed potatoes and yams onto trays. It took more effort to square away my uniform and keep clean.

When my shift was done and I got a chance to grab a meal and sit with the soldiers it really sank in just how far that simple act went. It’s difficult to put into words. You had a group of strangers really, bonded together by their service to country, unable to go home to their families, some without families to go home to. We were all there sharing our Thanksgiving meal with each other, making up a family of misfits. These were the moments that made life in the Army special. For all the horrible memories, all the shit details that you had to pull, days like Thanksgiving were a chance to show our best. These are the days to remember.

This was the third Thanksgiving in a row that I was away from home. Just like my Korean Thanksgiving it was not spent alone thanks to some special people. Rhana, who was our brigade S-2, and her fiancé Sid invited me and one of the other single LTs who were in the brigade HQ to share Thanksgiving dinner at their place. They didn’t need to do that, but they were leaders in the true sense of the word. They were the only ones who seemed to have thought about Gregg and me. Thanks to them I had another great memory of Thanksgiving in the Army, rather than another lonely meal. Another meal where I got to experience the traditions and food of strangers who had become my family.

That brings us to Thanksgiving 2009. Basra, Iraq. The photo above is from that day. It’s the four captains of Team Sword with the DFAC manager in the middle (I’m the short one). Camp Savage, the small outpost we lived on, had maybe 30 American military personnel and then 50 contracted support personnel. That included the Ugandans who provided base security, their eastern European bosses, a few Iraqis working the fuel truck, and the DFAC staff was mostly Indians and Pakistanis. That doesn’t include the interpreters of our team and the PRT who we shared Camp Savage with. We easily had 8 different nationalities on Camp Savage, most of them unfamiliar with Thanksgiving.

Korea and Fort Hood were both normal, in that it was senior NCOs and Officers serving meals to junior enlisted. At Camp Savage we had our Border Transition Team and the Provincial Reconstruction Team, pretty much all NCOs and Officers. The PRT may have had a couple junior enlisted but my memory of that isn’t perfect. Still, we got behind the serving line and scooped up the finest foods our tiny DFAC could make. We served meals to all those contracted support personnel who kept us safe and well fed, and we served each other. With so few people on Camp Savage the serving part didn’t last too long, but we all took our time sharing Thanksgiving dinner with this queer assortment of people. Some were there for fortune, some for adventure, and some out of a sense of duty. It was a Thanksgiving that I am grateful to have experienced.

Basra and Seoul are about the same distance from Buffalo, NY. In the span of three years I had bounced from one side of the globe to the other. The holiday had become symbolic and powerful. It had become a day that I cherished and learned from. It became a day that I looked forward to in the same way I had once looked forward to Christmas. After that first abysmal Army Thanksgiving I had three consecutive Thanksgivings where I gained new family and grew into a better person. Now, every Thanksgiving I get too look back on those memories. I am infinitely grateful for those days, for those people, and for the chance to have made them part of my life.

Until we meet again.

One thought on “Thanksgiving in 3 acts”